The world cries out...

Tozer, in this weeks reading, lifts up the idea that: 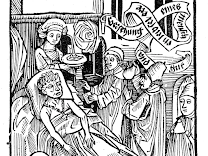 "Today, the religious situation cries out for the skilled moral physician who can diagnose our ills and prescribe wisely for our cure...It is imperative right now that we have the benefit of the piercing discernment of the Spirit. We must not only know what God has said; we must hear what God is now saying." [p. 111]

As I implied in the last post - it is a shame that preachers so often simply go through the motions, following an idealized lectionary to ensure a balanced treatment of the scriptures rather than seekng to carefully discern the particular needs of the congregation.

I have struggled with this very issue this week as I prayerfully sought a sermon topic, scripture lesson, or issues that I felt the Holy Spirit leading me to address.  When all else failed I went to the lectionary passages for this Sunday and voila I was convicted. (So I'm not saying the lectionary has NO value rather that it needs to be seen as secondary.)  It's a message that the world so needs to hear today, republican, democrat, socialist, communist, federalist, Christian, Buddhist, Hindu, Mormon, Agnostic, rich, poor, sick and well.  It has to do with "sacrifice." Sacrifice is a word rarely used today.  In our "me first", "I need", "I deserve", "I want", entitlement oriented world, we have lost the concept of sacrifice. Our success often, if not always, comes at the expense of others.  We refuse to see success as necessarily being a matter of personal failure, personal sacrifice, personal emptying. Success is seen as getting rather than giving. 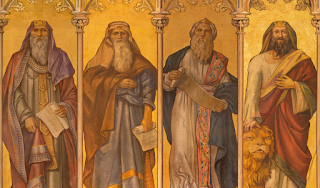 In Ezekiel 34:11-17 and Matthew 25:31-46 (pre Revised Common Lectionary passages) we find the matter of judgement, sheep, and goats.  The Ezekiel passage plays with the idea that the judgement will take place between the sheep themselves.  Those sheep which have thrived at the expense of the others, the fat, healthy, and strong sheep will be destroyed.  The stray, weak and injured sheep will be provided for.  And the question becomes whether or not the sheep are watching out after one another; whether or not the Shepherds are playing favorites with the sheep. The True Shepherd is coming to search for these lost and scattered sheep.  And he's coming with a Ricky Ricardo, "Lucy, you've gotta lotta splainin' to do" attitude.

Jesus, the Shepherd of whom Ezekiel spoke, clarifies this judgement even further with the thought that our own actions will judge us.  We who are aware of the situation and don't act, don't stand up, don't protect and defend...we who allow the goats to flourish at the expense of the sheep, or even some sheep to suffer so that other's may succeed, who scatter the sheep...

In our own situation today, we tend to see a lot of control and manipulation in the name of self interest/self love, "what will help me to prosper", "how do I get my way" attitudes.  Even when we hear the call to provide for the scattered, the injured, and the weak, it still seems to be put on others to provide for them, or "it's the government's job to care for them", or a "let's pay for it from the church's budget".  It's rarely a "this is my responsibility."  And in Jesus' parable those guilty of not providing, caring, encouraging are proclaiming ignorance of the needs while the blessed are claiming ignorance of their own personal helpfulness...as if personal sacrifice for the sake of the other was so natural and ingrained they never even realized they were helping.  The lesson here is that if we think we're doing things to help others, we're probably doing it out of selfishness.  Real help comes from those who are oblivious to the amazing job they are doing.  Those are the kind of people we need today...NOT those who have a plan to address it, or an idea of how to address it, or a solution to the problem, but people who are the solution because of the way they live... Are we living like healthy sheep at the expense of the other sheep, or are we sacrificing our own well being, and becoming the poor, the lost, the weak, for the sake of the other sheep.  Will we, like Jesus, sacrifice everything we have, becoming poor in so many ways, in order to prosper others? When He comes, will he find us well fed and cared for but damned or wandering, scattered, and weakened by our service for Him.

Are we ready to assume the role of becoming less so that He may become more in other's lives [John 3:30]?